By the 1870’s Virginians were aware of the great depletion of major food fisheries due to overfishing and multiple dams blocking fish runs.  The Virginia Assembly created the office of the Virginia Fish Commissioner in March 1871 to evaluate Virginia’s commercial fisheries and make recommendations for restoration.  One of the main strategies was artificial propagation.  William Ball was the first fish commissioner of Virginia and focused efforts to propagate and release shad, black bass, and trout. In 1894, the Virginia Commissioner of Fisheries wrote “the question of greatest importance to our fishermen is the appalling decline in the number of the free migratory fishes that annually visit the waters of the State.”  (Wilkins 1894). This effort was parallel to efforts in other states as well as the federal government, which established the Commission of Fisheries in 1871, to examine depletion of fisheries in the nation.  Seth Green, the father of fish culture, opened the Caledonia Hatchery in 1864 and the race to build hatcheries was on.  The first hatcheries in Virginia did not raise shad or striped bass.  First hatcheries to propagate these fishes were at Fort Washington and Fishing Battery Island (Maryland) and Albemarle Sound at Edenton, North Carolina.
Marshall McDonald played a key role in Virginia fisheries restoration during this time.  McDonald was a Professor at Virginia Military Institute before and after his military career during the Civil War. He was chair of Geology at Virginia Military Institute when he developed an interest in fish farming. He filed a patent for a new fishway design in 1879, which he sold to the state of Virginia in 1880. He also invented a hatching bucket for hatching eggs of pelagic fishes.  As Fish Commissioner of Virginia, Marshall McDonald began construction of the Lexington hatchery on the Town Branch spring in 1875 (The Advocate 2006). This hatchery and one managed in Blacksburg by Professor Mason G. Ellzey, Virginia Agricultural and Mechanical College, would train students in the art of pisciculture.  California salmon eggs (Oncorhynchus tshawytscha) were hatched in these hatcheries in 1876 and yielded salmon fry released in the tributaries of the James and Roanoke drainages.  The Virginia Fish Commission (1877, p. 56) reported that the two hatcheries were “doing good work” although they were compelled to buy trout eggs.  However, the California salmon released never returned and efforts to propagate salmon in Virginia ceased.  The Lexington hatchery closed in 1880 and I could find no historical records about the longevity of the Blacksburg hatchery.

Marshall McDonald traveled to Wytheville, Virginia in August, 1879 to select a location for a fish hatchery.  This new trout hatchery was built on 3 ½ acres of land donated by S.P. Browning (Chitwood 1989). The location 3.5 miles west of Wytheville, off Old Stage Road, was ideal with two springs that produced 1,100 gallons per minute and was directly on the Atlantic, Mississippi and Ohio Railroad line (later Norfolk & Western).  It was in operation by November and was operated by the U.S. Fish Commission in 1882 and completed in 1888. At the time there were twelve rearing ponds for trout, piping to ponds, a retaining wall on Tate’s Run, and a two-story building for rearing troughs.   The Wytheville hatchery raised the McCloud strain of Rainbow Trout from eggs shipped from the federal hatchery on the McCloud River.
From annual reports of the U.S. Fish Commission we find that “In the spring of 1885 about 300 grayling were hatched from eggs collected from wild fish in the streams of Michigan by Mr. F. N. Clark and forwarded to Wytheville.  These 300 fish are being kept for breeders, and at the close of the year were in fine condition.”  (U.S. Fish Commissioner.  1887 Page ixxxii).  Further, stocking of Rainbow trout to the headwaters of the Shenandoah River in Augusta county and tributaries of Potomac in Maryland as well as ponds in Maryland, SW Virginia and Tennessee occurred in 1886 (U.S. Fish Commissioner.  1887.  Page ixxxv)
In the fiscal year ending June 30, 1887, McDonald (1889, p 4-5) reported receiving Rainbow Trout from California, Brook Trout from Michigan, Brown Trout from New York, Atlantic Salmon from Maine, Common Carp from Washington, D.C. and Rock Bass and Smallmouth Bass collected locally from New River and Reed Creek.   The Atlantic Salmon were stocked in a tributary of the Shenandoah River near Staunton and South Fork of Shenandoah River near Waynesboro.

The first superintendent of the Wytheville Hatchery was William E. Page of Lynchburg, and he was soon succeeded by George A. Seagle, a native of Wythe County.  Seagle invented the Seagle shipping box for transporting trout fry long distances. Seagle was succeeded in 1922 by Charles B. Grater of Leadville, Colorado, who served until 1930.  In 1930, Samuel A. “Gus” Scott became the fourth hatchery manager (Chitwood 1989).  Under Scott’s management the Wytheville, hatchery produced 20,000 to 25,000 pounds of fish annually, mainly Rainbow Trout, bass, and bream.

This historic hatchery operated until 1968, after a new facility was opened on Reed Creek.  The hatchery was donated to Wytheville Community College for use in biology classes.  In 1987, it was purchased by Dale Bracken who restored the hatchery, which now operates as Brakens Fish Hatchery for recreational fishing.
Approximately 100,000 anglers fish for stocked trout in Virginia waters and their fishing satisfaction depends on annual stocking of catchable-size trout.  Wild trout occur in over 2,300 miles of coldwater streams in the Commonwealth and native Brook Trout Salvelinus fontinalis thrive only in higher-elevation mountain streams.  Five trout hatcheries operate to produce stocked trout in Virginia.  These include stations at Marion (Smyth Co.), Montebello (Nelson Co.), Coursey Springs (Bath Co.), Paint Bank (Craig Co.), and Wytheville (Wythe Co.).  Trout hatcheries are open to the public to tour and learn more about the propagation of trout.  Teachers can connect students to local watersheds with Trout Unlimited's Trout in the Classroom program, which raises trout from egg to the fry stage for stocking.

What's New In the World of Freshwater Fishes of Virginia? by Don Orth

The Field Guide to the Freshwater Fishes of Virginia will be released by September 24th. I promise that even those familiar with our local fish fauna will learn something new.  I’ve received many questions about the forthcoming Field Guide and answer a few of them here.

How many freshwater fish species are there in Virginia?  There are more species (226) and more families (28) of freshwater fishes than appeared in Jenkins and Burkhead (1994) treatise.  How’d that happen?  It’s a combination of discoveries of cryptic diversity, introductions, and elevation of subspecies to species status.

What the most species rich group?  The order Cypriniformes is the most diverse order of freshwater fishes in the world, numbering over 4,602 currently recognized species (Fricke et al. 2019).  This is more than 200 new Cypriniformes species since we first began working on the Field Guide.

What major taxonomic revision has occurred recently? The former subfamily Leuciscinae was elevated to family level (Tan and Armbruster 2018). Leuciscidae has 680 species and this now includes what we used to consider the native North American Cyprinidae as well as some European and Asian minnows.  In Virginia, we find 71 species in the newly defined Leuciscidae, making this the most species-rich family in freshwaters of Virginia. Xenocyprididae encompases the introduced fish we know as Ctenopharyngodon idella – Grass Carp. Cyprinidae includes 1,722 valid species, such as the Common Carp, as well as other carps, barbs and barbels, and tor.

How come Virginia has such high number of freshwater fishes?
Virginia has a humid, temperate climate with about 43 inches of rainfall annually. In this relatively wet environment, differences in geology and topography provide diverse aquatic habitats and thermal regimes enabling a wide diversity of fish species to evolve and thrive. Historical factors, such as the lack of Pleistocene glaciers, interconnections between river systems, and species dispersal patterns, all contribute to Virginia’s rich fish fauna.  Virginia has five landforms, each with distinct geologic histories and freshwater habitats.  These are depicted on the map below -- Appalachian Plateau, Ridge and Valley, Blue Ridge, Piedmont, and Coastal Plain. Virginia’s highest peak is Mount Rogers at 5,729 feet above sea level. 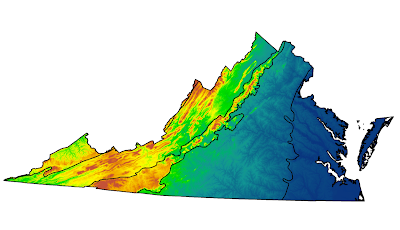 What is the rarest fish species of Virginia?
Erimystax cahni – Slender Chub

What is species is the newest introduction to Virginia?
Channa argus – Northern Snakehead

What family has the most cryptic diversity?  Cottidae

What’s the most colorful fish in Virginia?  That’s a toss up between the
Chrosomus oreas Mountain Redbelly Dace and
Etheostoma osburni Candy Darter
You’ll have judge for yourself. Each of these colorful species was illustrated by Val Kells.

What rare fish has high promise for recovery?  The Yellowfin Madtom has been cultured in captivity and can be introduced into streams of its historic range.

What is the most cultured species in Virginia?   More than 1.5 million trout are produced in Virginia's 5 trout hatcheries each year.  Most of these are Rainbow Trout Oncorhynchus mykiss.

What species has the smallest range?
Etheostoma percnurum – Duskytail Darter occurs only in Copper Creek.

What’s the best fish story? That would have to be the sturgeons (Acipenseridae).  These ancient bony fishes lived during the Cretaceous period during the age of dinosaurs (145.5 and 65.5 million years ago). Sturgeons are one of the largest and longest-lived anadromous fish in North America and two species occur in Virginia waters.  The Atlantic Sturgeon may reach a maximum size of 14 feet and 811 pounds based on a Canadian specimen.  The population has been depleted coast wide for a long time.  During the late 1800s, fishing for sturgeon eggs (to sell as caviar) attracted so many people, the trend was referred to as the “Black Gold Rush.” Atlantic Sturgeon were thought to be gone from Maryland waters of the Chesapeake Bay, but recent good news indicates they are still there. Also, Atlantic Sturgeon are reproducing in the James River.