Why Does the Male Goby Sing? By Don Orth

Do you now why the male goby sings?

We sometimes encounter two very similar fish species in similar places. When the two species are difficult for the novice to differentiate, we further wonder “How are the species reproductively isolated?”  Ernst Mayr, a leading evolutionary biologist of the 20th century, classified reproductive isolating mechanisms into pre-zygotic (act before fertilization) and post-zygotic (act after fertilization).  In the case of sympatric species, behavioral isolation may involve distinctive behaviors designed to increase contact between breeding individuals of the same species. Post-zygotic mechanism are less efficient for reproductive isolation.  Although, we don’t often observe these isolating behaviors, there must be some subtle cues present during breeding.   Fish use pheromones (smell), vision, and sound for species recognition and reproductive isolation. Yes, fish make sounds that travel well underwater. We’ve known this for a long time (Myrberg et al. 1965; Gerald 1971).  Listen to a few fish making sounds here.
Recent studies confirm that many fish species communicate via sound during courtship. Typically these are low-frequency sounds produced by males when close to females, while other fish make long-distance sounds to advertise their location. Black Drum Pogonias cromis can communicate up to 30–100 m (Amorim et al. 2015).  Goby males emit sounds from their nests to attract mates (Malavasi et al. 2008). It may not sound like singing to humans. But the male fish sings in order to attract a mate. There is enough information in the sound signals that the female can assess size and condition of potential mates.  In a recent paper, Eva-Lotta Blom and coauthors studied two species of gobies (Gobiidae) to examine visual and auditory cues during courtship. Two species, Common Goby Pomatoschistus microps and the Sand Goby Pomatoschistus minutus, are members of the species-rich family Gobiidae.  Gobies are small, benthic fishes with modified pectoral fins fused together, two dorsal fins, and often distinctive color patterns. Many are popular aquarium specimens favored for their colorful patterns or behaviors. See gallery of gobies.

The Common Goby and the Sand Goby have sympatric distributions. During breeding they are found in close proximity, often competing over the same nest resources. To study the role of vision and sound in reproductive isolation, Blom and coauthors simultaneously recorded sounds with a hydrophone and visuals with a camcorder of breeding individuals under controlled lab conditions. What they learned was that females like males that sing.  In addition, there were visual cues that differed between species so that a female Common Goby would not be fooled by the behaviors of a male Sand Goby.
Differences in courtship behaviors and cues also help explain why the two morphologically and ecologically similar species select different habitats for breeding.  The courtship sound of the male Common Goby has shorter duration than the one of the Sand Goby.   Male Common Goby swim faster than male Sand Goby during courtship displays.  Finally, only the female Sand Goby display black eyes during courtship.   Nests of Common Gobies are more prevalent in shallow, soft bottom areas whereas Sand Goby nests use Mya clams in deeper, sandy beaches. The habitat differences influence sound transmission.
During breeding, visual cues are typically expressed by males as breeding coloration.  In the Sand Goby, the female display of black eyes acts as a declaration of intent that the female is ready to mate. Female Sand Gobies are able to change eye coloration, sometimes gradually, other times quickly, even within seconds.   The black eyes are not conspicuous in males.  In experimental aquaria, Olsson et al. (2017) observed that occurrence of female displaying dark eyes are more likely in those females close to spawning readiness, as measured by body roundness.
As the studies of gobies illustrate, females prefer males that sing and can distinguish sounds for closely related species in order to isolate species reproductively.  The study raises questions about how males learn to sing and whether and how noise from human activities affect signals during breeding.   But now  you know why the male goby sings.

“Read to Me!” Grandpa Don

Children today are losing their connections to nature and the outdoors. Richard Louv, in his 2005 book, Last Child in the Woods, labeled this the ‘nature deficit disorder.’  What’s wrong with spending less time in the outdoors?  Childhood obesity, ADD, mood disorders, and even myopia, have been associated with excessive indoor child rearing habits. Many parents fear the outdoors and keep children indoors entertained by electronic devices.  Richard Louv, however, recalls that "The woods were my Ritalin. Nature calmed me, focused me, and yet excited my senses."


How will today’s youth ever develop a strong love for nature and the outdoors?  We need to put away our electronic devices and read to children. When you do, be prepared for short attention spans and child-fueled activity levels. That's normal, but so is a child's curiosity. In those rare, special moments we should be ready to read a book at your child’s level.  And it should preferably be about fish and fish life.  What did you expect from a blog labeled “Ichthyology?”  The key is to start early. It’s never too early to read to your child.

When you read a narrative to a child, remember that your voice matters.  Read the lines in the voice of each character.  Storylines help young children develop their ability to attribute mental and emotional states to others.  Stories have influences on children.  Most adults will share an influence from early reading and how it sparked a life-long curiosity.  Dr. Solomon David, Assistant Professor at Nicholls State University, and authority on primitive fishes, recalled how his first exposure to an Alligator Gar in Ranger Rick magazine sparked a life-long interest in these ancient fishes (see Living Fossil Fishes).   My own eureka moment started me on a long quest to become a fisheries scientist (see On Becoming An Ichthyologist).

Most children's books are not about fish. 😠  But there are some wonderful options, old classics and new classics.  Here I will introduce eight of my favorites.

Fish Do the Strangest Things, by Leonora and Arthur Hornblow, was part of a nature series (Animals do..., Birds do..., and Insects do...) to encourage young children to read.  Published in 1966, it is the earliest published book on my Fishy List.  It includes many interesting facts and illustrations about seventeen unique fishes.  This book explores the way of life of the remora sharksucker, grunion, flying fish, sea horse, mudskipper, and many more wonders of the fish world.  The descriptions are long and accurate, best for more advanced and patient readers.

Sea Stories: How the Tiny Gobies Saved their Coral Home, by Danielle Dixon and Maural Sowlet, explores the relationship between gobies and coral reefs.  In this story, the critters are personified and have a lesson for the reader.  The story and the critters are based on recent scientific investigations on how corals can send chemical signals to gobies so they will remove competing seaweeds. The story is a fun read for children and has additional information to engage the adult reader.  I anxiously await the release of the next book, Sea Stories: How the Clownfishes Home Gets Into Hot Water. 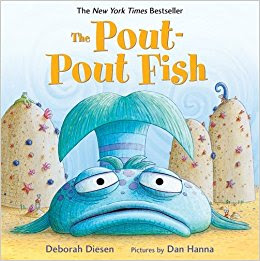 The Pout-Pout Fish, by Deborah Diesen and Dan Hanna, is the first in a popular series of Pout-Pout books for preschoolers.  The language is rhyming and the bug-eyed fish spreads "dreary wearies" all over the place.  Undersea creatures of all types (clam, jellyfish, octopus, squid) complain that "Your hulky-bulky sulking is an unattractive trait!"  The excerpt below demonstrates how fun this book is to read aloud.

Deep in the water
Where the fish hang out
Lives a glum gloomy swimmer
With an ever-present pout.

Several pout pout fish books are available that deal with issues of bullies, school, being alone in the dark, and holiday activities. While I cannot be certain what fish species the pout-pout fish was patterned after, I do know the permanent frown is common look for most fish predators.
Two books, Shark Lady (by Jess Keating) and Swimming with Sharks (by Heather Lang), explore the ground-breaking work of marine biologist, Dr. Eugenie Clark (1922-2015).  Clark was an inspiration to many young female scientists for her tenacious persistence in the face of male dominance in her field. At one point her mother suggested "maybe you should take up typing and you could be a secretary to William Beebe." William Beebe was her hero at the time.  However, she ignored such biased opinions and went on to do groundbreaking studies while raising four children!  She made numerous scientific advances and published over 175 scientific articles during her career. She wrote two books Lady with a Spear (1953) and The Lady and the Sharks (1969) that chronicled her early experiences.  The two new children's books are a fitting tribute to her life and work devoted to diving and science.  If interested, read her obituary.
The Rainbow Fish is an award-winning book about a beautiful fish who finds friendship and happiness when he learns to share. The book tells the story of the Rainbow fish with its distinctive shiny scales. The moral of the story is about the value of being an individual. Click here to listen to The Rainbow Fish read by Ernest Borgnine.

Russell the Mussel is a local favorite, written by Adele Conover, Richard Biggins, and Richard Neves. It chronicles the story of Jill, who befriends Russell the Mussel, and the scientist Dr. Richards.   Dr. Richards is a scientist who works to restore habitat and propagate Rabbitsfoot mussels to add to Crystal Creek.  Along the way the reader learns more about fishes, snails, mussels, frogs, hellbenders, insects, and crayfish that live in Crystal Creek.

I highly recommend these books and hope you will read them.

These other popular books about fish should be added to your children’s fishy library:

One Fish Two Fish Red Fish Blue Fish by Dr. Seuss
Curious George at the Aquarium by H. A. Rey, Margaret Rey, and R. P. Anderson
Swimmy by Leo Lionni
Splish, Splash! by Sarah Weeks and Ashley Wolff
McElligot’s Pool by Dr. Seuss
Fish Is Fish by Leo Lionni
Mister Seahorse by Eric Carle
Big Al by Andrew Clements and Yoshi
A Fish Out of Water by Helen Palmer and P. D. Eastman
Sea Creatures Pop-up: Squirmy, Scary Fish Face- to-Face
by Sally Hewitt and Chris Gilvan-Cartwright
Down, Down, Down: A Journey to the Bottom of the Sea by Steve Jenkins

Read aloud and kids will ask for more.  Take a kid fishing, but be ready to read to a child.