BOOK REVIEW Are You Ready for More Underwater Adventures? by Don Orth

When you see a river or stream, do you want to explore it?  Do you wonder what lives there?  Do you feel the river calling to you to get wet?   If you answered yes, to any of these questions, then I have a book for you.  Snorkeling Rivers and Streams: An Aquatic Guide to Underwater Discovery and Adventure, by Keith Williams, is an invitation to explore the many secrets that lie beneath the water's surface. 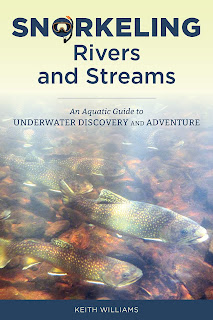 Keith Williams is executive director of NorthBay, an outdoor educational program.  He has snorkeled extensively in rivers across the United States, has developed river snorkeling-based science curriculum, and works with the U.S. Forest Service to develop river snorkeling programs. This new book helps you to understand how to see beneath the water surface with a mask and snorkel.  There are twelve chapters, ten about specific fish you may encounter via snorkeling, and one chapter on frogs, toads, turtles, snakes, and gators, and one chapter on benthic macroinvertebrates.  The reader will learn about many types of animals seen when snorkeling.   However, the book must leave out many fishes in order to keep the book reasonable short and accessible.   I found a broad and national representation of fish groups so the reader will not be bored.  Salmon, lamprey, eels, darters, minnows, tomcods, sculpins, herring, quillback, shad, sunfish, and bass are dominant fishes described in the book.  These provide ample opportunities for fish watching and specific issues and people related to the conservation and restoration of these fish. You meet many people on snorkeling adventures.  One that Keith Williams met was Elmer Crow, a Nez Perce elder who shared his philosophy— “We are the circle. That’s what life is about. So when one of us is in trouble, that’s when the rest of us need to step in.”


The introduction uses a story of Keith instructing a young student to find and identify a small fish.   After seeing and identifying a new species for the first time, she stops and asks “How can we conserve something if we don’t know it’s there?”   The introduction illustrates that the focus on this book is educational.  This student quickly got the message and understood that in order to protect a stream, we need to know and appreciate and love it.  Watching and experiencing aquatic animals means we must watch and experience their life in its habitat.   The introduction provides thorough descriptions of gear, safety, snorkel etiquette, and where to go, before providing a message for conservation.  Throughout the book, it’s clear that conservation starts with snorkeling.

You will be ready to jump right in before finishing the book.  In the closing chapter on benthic invertebrates, Keith Williams calls us to “stick your face in the water, and get to know those unknown species—on their own terms underwater.  Settle into the creek to just watch and learn and admire the beauty and intricacy of even the smallest freshwater lifeforms.” The book and the similar regional Snorkeling the Hidden Rivers of Southern Appalachia confirm that snorkeling streams and rivers is a legitimate and growing outdoor educational activity. 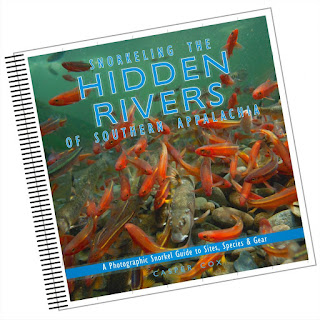 I expect the book will help the activity to expand.  What comes next is anyone’s guess. Jim Herrig, a longtime Fisheries Biologist on the Cherokee National Forest began programs to get youth groups to snorkel in creeks on the National Forest.  Keith Williams has worked with the U.S. Forest Service and other to develop a freshwater snorkeling curriculum.  If you wish to expand your own underwater adventures with youth groups, consider the snorkeling toolkit and curriculum available here.

In the future, I hope to see evaluations of the educational values of these activities. Educators and education administrators want to know if these short-term outreach activities can have a positive impact on the scientific literacy and long-term career goals of the participants.

Before the calendar changes, let's look back on 2019.  Long ago I adopted Author D.S. Mixell's  New Year's resolution: “...to never make New Year's resolutions. Hell, it's been the only resolution I've ever kept!”   I am required to create an electronic Faculty Activity Report (eFAR), not to make resolutions. Most colleges and universities have an electronic data base designed to make reporting as tedious and uninteresting as possible.  While it serves for annual merit review purposes, it's format and requirements are annual reminders of the creeping and creepy corporatization of the university.

"The corporate university's language of new findings, technology transfer, knowledge economy, grant generation, frontier research, efficiency, and accountability dominates how academic scholarship is now framed both within the institution and outside it." Berg and Seeber (2017)

Two years ago while working on my eFAR, I took a break to visit Virginia Tech's Animal Hospital carrying a dead Freshwater Drum Aplodinotus grunniens. It was destined for the x-ray machine. My Ichthyology students had an easy time finding the lucky stones with the help of this radiograph (below), showing the large ear bone behind the eye socket and under the brain case. Large otoliths in the Freshwater Drum are called lucky stones, which are often found washed up on the river banks or lakeshores.  I have no lucky stones in my pocket, but do keep a lucky fish scale in my wallet.
The Virginia, Virginia Tech, and West Virginia chapters of the American Fisheries Society met in Blacksburg for a joint annual meeting.  The first-day workshop focused on R3 Initiatives to Recruit, Reactivate, and Retain anglers.  John Arway, retired Executive Director of the Pennsylvania Fish and Boat Commission, was our keynote speaker. John shared his experiences and questioned whether the North American model of conservation is still relevant for the 21st century (hint: it's not).  Ever since this session, I've had the word "relevance" buzzing around in my head.  Can I find messages of relevancy for my eFARS?  Jane Lubchenco, Tyler Laureate and former NOAA administrator and distinguished University professor,  wrote that:  “Scientists need to make their research more relevant, more understandable, more connected to people's lives. I believe this is part of the way to address our ‘post truth’ world.”  Science and society are linked and making work relevant is not as easy as it sounds. Many debate how scientific findings should be shared and by whom.
I hope my teaching and scholarship is relevant beyond the classroom.  Virginia Tech Ichthyology is a public Facebook group that has topped 1,020 group members this year.  Members greatly enrich novice student experiences in Ichthyology.  Students are reminded daily of how others are making a living and finding enrichment through fishes.  Students posted relevant assignments to Facebook, including the Ichthyologist of the Week.  Virginia Tech Ichthyology class blog is viewed by people around the world each day and provides an outlet for relevant student writings.  Please share these outlets with others who may find them relevant.

Relevance in Virginia Tech’s strategic plan means commitment to a comprehensive global land grant mission and transdisciplinary learning and engagement.  Every day we connect with students in ways that transcend the classroom experience. It's called the Virginia Tech Difference, which relies on a globally relevant campus experience that has a life-long influence on students. At the annual meeting of the American Fisheries Society in Reno, Nevada, I was honored to receive the 2019 Excellence in Public Outreach Award.  Relevance depends on writing for many audiences, and not just for the few scientists in my own narrow field of interest. Even introverts can do public outreach and I hope my students will be inspired to explore innovative methods to reach a broader audience.