Last year I initiated "On Becoming: Digital Storytelling Pedagogy in Student Development,"   Diggs Teaching Scholar project.  The formal description is:  “on becoming is a developmental project to provide a road map for beginners as they experiment with digital story telling.  It relies on a notion of a community of practice and directed movement from the periphery of the community to a personal identity.”   In reality it is a story about fear, love and delusion.   Storytelling has negative connotations in STEM  (STEM=Science, Technology, Engineering, Math) disciplines.  In reality, storytelling has more positive connotations than metacognition or cognitive behavioral therapy.   When communicating with non-experts, narratives increase recall, comprehension and interest.  Humans make and store meaning as narratives.    So I believe students must learn the value of narrative writing. 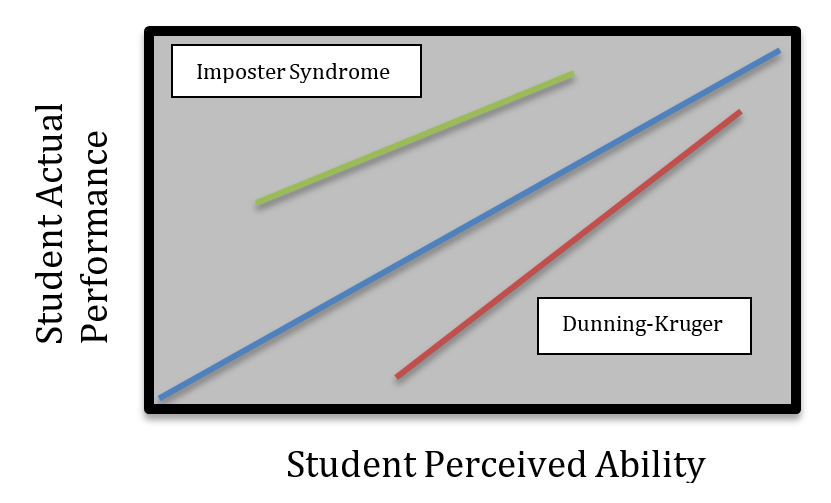 As a faculty member, I am a cognito-meter.   And I believe that storytelling may serve as a calibrating device.  If we work with students to develop their storytelling in a community of practice framework, we encourage a lifelong process, the VT aspiration of self-understanding and integrity.   And other aspirations, curiosity, courageous leadership, civility, and Ut Prosim may follow.   Marshall Ganz of Harvard wrote that “Storytelling is the discursive form through which we translate our values into the motivation to act.”

Let me begin with the first bias to remove with our cognito-meter, that is fear.   Fear motivates.   But fear wastes human capital and leads to frustration and drop out.   In the math and sciences, students first encounter the fear that they are stupid.  We hear “I am not good at math.”   In my world stupidity is (or should be) an everyday occurrence.    When I work on important, unstructured problems, “feeling stupid” is normal.   I muddle through as best I can.   It is very, very hard to do research on important issues.   Virginia Tech calls it “discovery,” but most of the time I just don’t seem to know what I am doing.     In order to protect our integrity, scientists rely the structured scientific paper written in a fraudulent style (IMRD) that sanitizes the real process of discovery (See "Is the Scientific Paper a Fraud? by Sir Peter Medawar).    Yet we don’t tell that story.    The IMRD scientific paper is the delusion that misleads the beginner.   It doesn’t describe all the struggles and frustrations to learn how to invent a suitable method to test an important hypothesis.        “Feeling stupid” is perfectly fine as long as we learn something along the way.    When a student is becoming a scientist, he or she must tell their stories.  Hence, I advocate for storytelling with a mentor or in a small community of practice

Until the student has developed an honest self-understanding, she or he becomes one of two types of human resource problems.  They are either an “imposter” (driven by fear) or an “incompetent awesome” (driven by delusion).   The “Imposter” is driven by fear of being found out.   To avoid being found out as a “fraud” the imposter overworks and overachieves.  The imposter syndrome is common among women, African Americans, graduate students, and new tenure-track faculty.

The opposite bias was named the Dunning-Kruger effect by two Cornell professors who described it in 1999.   This is a cognitive bias in which unskilled individuals suffer from illusory superiority, and mistakenly rate their ability much higher than is accurate.   I call these the “incompetent awesomes” – these deluded individuals lack the "metacognitive ability to recognize their own ineptitude."    If they escape detection, they are promoted beyond their competence – the Peter Principle.  But follow-work by Dunning and Kruger showed that we can teach people to self-evaluate.

Our goal as faculty is to help students become productive members of a community of practice by doing something well and loving it.    When this happens the cognito-meter is calibrated and you are welcomed in a community of practice.  Virginia Tech President Sands mentioned Purdue-Gallop poll findings released last spring.  One key finding was that engaged employees had important mentor who discussed goals and a professor who excited them about learning. These fortunate students found some project to love, and someone to mentor their learning.   Unfortunately, most employees surveyed did not have this experience.

Any good story starts with a dramatic question –   “how am I becoming a….?”   My students are currently struggling with this assignment because they "are learning Ichthyology after all," and they view it as separated from all other classes and all other experiences.   Yet, to tell the story, they must integrate their experiences in the learning process.   Integrated learning is the goal of "On Becoming."


I have a sample digital story that I developed last summer at a workshop with Center for Digital Storytelling.   I created an exercise for first-year students on career exploration that incorporated the idea of a wandering map.  The wandering map is from Katharine Brook’s book “You majored in what: Mapping Your Path from Chaos to Career”  -- a book about the role of chaos theory career change.    The exercise is to help students identify their own dreams, values, and strengths and illuminate that there are many routes toward a fulfilling career and life.     I developed a digital story of critical events in my early life that illuminated the values of an 18 year old “Don.”   This story is used to illustrate the idea of a wondering map; see “Not EveryoneTruly Live."

“On becoming" is a project for beginners as they experiment with digital story telling. We begin in a community of practice and move from the periphery of the community to a personal identity.”   “On becoming” is recognition that our students have hopes and aspirations, just as I do and I hope to celebrate their successes.  Storytelling allows students to understand themselves and demonstrate integrity, so everything is in alignment.   As Gandhi wrote --  “beliefs lead to thoughts, thoughts lead to words, words lead to actions, actions lead to habits, habits to values, and values become their destiny.”